“L-I-F-T” Rise to Your Potential

The lift bridge in our 2022 Festival Location (Duluth, MN) inspired our theme. Plans are made and we can’t wait to head north.

Special activities including Bells and Beer Choir on Thursday evening and Dinner Train will provide opportunities for fun and fellowship.

Bill Alexander, Cathy Moklebust and Karen Van Wert are teaming together at the podium to lift ringers to success.

A variety of Learning possibilities will be included in this fabulous event by a diverse group of handbell experts from Area 7 and beyond.

In case your whole choir cannot make the trip does not mean you cannot join us. We will assign you to a choir as an “orphan”, who will adopt you in as one of their own because that is what bell ringers do.

Together we will make amazing music and share it with an audience at the closing concert, Sunday,
FESTIVAL CLOSING CONCERT
Sunday June 12, 2022 1:30PM Arena – DECC
DECC Duluth Entertainment Convention Center, 350 Harbor Drive, Duluth, Minnesota
Free and Open to the public. Audience is encouraged to bring a food or cash donation to the regional Food Shelf Service Project.
Ringer Dress code: The official Festival T-shirt and any color bottom

All Festival registrants must purchase and prepare/rehearse music both for their appropriate Division and Massed Repertoire.
Choose your Division based on your ringing proficiency.

COPPERS DIVISION REPERTOIRE – Cathy Moklebust, Conductor
If you proficiently ring up to Level 3+, you should register in the COPPERS Division, and purchase and prepare the two pieces listed below, in ADDITION to the MASSED Repertoire pieces listed below:

BRONZE DIVISION REPERTOIRE – Bill Alexander, Conductor
If you proficiently ring up to Level 5, you should register in the BRONZE Division, and purchase and prepare the two pieces listed below, in ADDITION to the MASSED Repertoire pieces listed below:

MASSED RINGING FESTIVAL REPERTOIRE – Conducting shared by Cathy Moklebust and Bill Alexander
Ringers from BOTH Divisions shall purchase and prepare the following pieces, in addition to their Division pieces listed above.

Sound files for each of these pieces can be found by following this link:https://drive.google.com/drive/folders/1azKsJCUe79XTU4BHHiy5xlqqQik44QwV?usp=sharing

CONFERENCE CHOIR REPERTOIRE – Karen Van Wert, Conductor
This is one of two Specialty Choirs for those who want to ring more than attend all of the classes.
All rehearsals are mandatory, with the first one starting at 9:00AM Friday June 10, 2022.
You will still be able to attend a few classes on Saturday.

This Specialty Choir will perform a concert on Saturday June 11, 2022 afternoon, along with the Bronze Plus Ensemble.

This Ensemble will consist of no more than three 3-5 octave rows of ringers.
There are additional fees to register for this Ensemble, which includes the music, your ringing assignment, and a concert T-shirt.

BUILT ON A ROCK – Kevin McChesney, 3-5 octaves, Level 3, plus Bell Tree
AGEHR Publishing AG35388
This piece was commissioned in honor of Karen Van Wert’s volunteer service to Area 7 and to those who served with her during her six-year term as Area 7 Chairperson. The world’s debut of this piece will be at the 2022 Area 7 Festival Conference in Duluth.

BRONZE PLUS ENSEMBLE REPERTOIRE – Cathy Moklebust, Conductor
This is one of two Specialty Choirs for those who want to ring more than attend all of the classes.
All rehearsals are mandatory, with the first one starting at 9:00AM Friday June 10, 2022.
You will still be able to attend a few classes on Saturday.

This Specialty Choir will perform a concert on Saturday June 11, 2022 afternoon, along with the Conference Choir Ensemble.

This Ensemble will consist of no more than one 5-6 octave ensemble.
There are additional fees to register for this Ensemble, which includes the music, your ringing assignment, and a concert polo shirt. 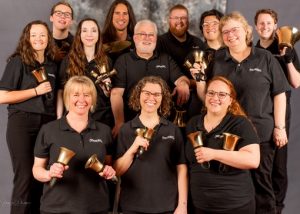 Festival registrants admitted free.
Concert is open to the public.
Tickets for the general public will go on sale in February 2022.

About Strikepoint:
Strikepoint, from Duluth, Minnesota, is a church-based, community/professional handbell ensemble. Led by artistic director Bill Alexander, this eleven-member group performs in a directorless ensemble setting. College students and community members have joined with selected ringers from the five bell choirs at Duluth’s First United Methodist Church to provide a consistently high level of musicianship since Strikepoint began in 1984. Strikepointers are often high school students, and sometimes as young as 13.

Annual summer tours have taken the group throughout the continental U.S. as well as to England, Scotland, Wales, Japan, Canada, Hong Kong, Sweden, and Hawaii. Strikepoint has been the featured performer at numerous Area and National Handbell Festival Conferences , as well as four National Handbell Directors’ Seminars.

Strikepoint rings 6-plus octaves of bronze Schulmerich handbells, 7 octaves of handchimes, 2 octaves of Silver Melody Bells, and 3 octaves of Petit and Fritzen handbells, along with a range of other instruments as needed.

Noted for capturing the enthusiasm of audiences with a dynamic style and accessible music, Strikepoint’s concert selections can range from Bach to Lady Gaga and include music both familiar and new. Strikepoint’s newest recording, “Reflections”, is simply “music to calm the mind and restore the spirit.” It has been used by thousands for meditation, yoga, and music therapy. Other available recordings include “Top Rung,” a combination DVD with bonus CD, and four additional titles on CD. Strikepoint recordings have been featured on local, national, and international broadcasts, and their social media posts have a large following.

Attitude, toward music and people, is an important factor in considering a potential handbell musician. Strikepoint’s philosophy includes the goal of making the very best music possible and experiencing the social interdependence and dynamics found only in a group of this kind. Or, as one member put it, “Good Music and Good Food.” Pizza parties and other social events play an important role in the Strikepoint culture. While the musicians take their music seriously, everything else is fair game.

YOU MIGHT WANT TO PARTICIPATE IN THESE FESTIVAL EXTRAS… 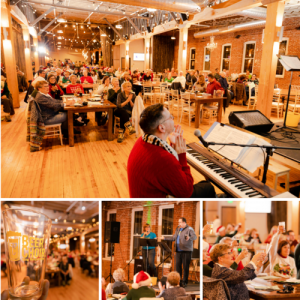 Do not miss this fun pre-Festival event, exclusively for Area 7 ringers.
We will gather at HOOPS, a local brewery up the street from the DECC.
Upon arrival, you will receive a handchime, a sing-a-along songbook and a voucher for your first brew.
Professional song leaders from the Twin Cities Beer Choir organization will lead us in the evening’s frivolities.

The ticket price includes entrance into the private area of HOOPS, the first pint (beer or other comparably priced beverage) and guaranteed fun.

Food-truck-type food will be available at the bar, at a discounted rate.

From the Beer Choir Twin Cities website:
When you walk into a beer hall for a Beer Choir event, you find a vivacious, borderline rowdy, gathering of fellow drinking singers ready to lift their voices (and glasses) in song.

Encouraged by a one or two outgoing Song Leaders, and supported by a kindly pianist, attendees BECOME the choir that sings while drinking beer. Grab a Beer Choir Hymnal—our songbook that will guide the evening—and a pint and get ready to join in on traditional drinking songs from Europe and America, some popular tunes and hymns, and a handful of adventurous choral songs.

You don’t need to love choral music, or even sing well, to enjoy Beer Choir—all you need to do is show up!

Another special treat for Area 7, exclusively … A prominent handbell composer has written a beer song just for us.
It will be debuted (sung and rung) on this special night.

Tickets will go on sale in February, 2022.
Space is limited. Watch here for more details.

On the historic North Shore Scenic Railroad, in cars reserved just for Area 7.
A 2-1/2 hour trip up the North Shore with pizza and fun for all ages!
One 8″ Domino’s Pizza plus soda included with every ticket.
The first part of the ride is narrated as we pass by all the sights of Duluth.
On the way back jam out in the concession car with live music from local musicians.
Beverages and snacks are available for purchase onboard the train;
Pepsi products, juice, water, as well as Beer, wine, and seltzers, candy & chips.

Everyone is on their own for Saturday night dinner. This is a perfect option for you.
If you do not choose this option for dinner, make sure you make reservations early at a local restaurant.

Discounted tickets will go on sale in February, 2022.
Space is limited. Watch here for more details. 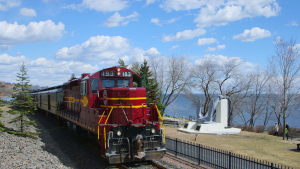